Meet Ashley of Domestic Imperfection! She’s a frugal DIYer and a mom of two who blogs about home decor, renovation, craftiness, and real life.

She’s also a DEBT FREE ROCKSTAR, because she and her husband paid off their house in 3.5 years. Here’s their story.

You paid off your house in 3.5 years. What made you decide to do so? Were you and your husband both on the same page about doing so right away?

My husband and I have always been on the same page when it comes to money, for which I’m very grateful. Before we were married agreed that we were going to live debt free. We have always paid for things in cash (cars, school, furniture, vacations).

The exception (there’s always an exception, right?) is that we borrowed money to buy our home. Saving up the money to buy a home outright was going to take longer than we wanted to wait, so we agreed to borrow for our home and get rid of the mortgage as soon as possible.

How did you come to think that way/agree to that?

I was raised debt free, my parents lived very frugally (still do) and never had any debt. Adam’s family was a little different. When I met him they were going through severe financial troubles because of debt. Adam saw what it did to his family and decided he was never going to let that happen to his.

If you don’t mind sharing, what income range did you pay it off on? And how much did you pay off?

How did you go about it?

We didn’t sit down and plan out a time frame, but we did sit down and write a detailed budget each month. In it we included money for basic necessities (and a tiny amount of fun money), and the rest went to the mortgage.

While we didn’t know we would pay it off in 3.5 years, we did know that we had to pay the mortgage off in under five years. In order to get the best interest rate we went with an adjustable rate mortgage with a five year lock. We for sure wanted to pay it off before the lock expired, so that was a big motivating factor.

(I know that adjustable rate mortgages are normally a terrible idea. We’re rebels.)

Did you ever get discouraged or impatient during the process? What kept you going if so?

I wouldn’t say we ever got discouraged, but impatient for sure. Although if you and your partner aren’t 100% on the same page about paying off debt (and one likes likes to go over budget) than I could see how this cold be an extremely frustrating process.

I sometimes got impatient when we continuously told ourselves “no”, but generally we stayed really motivated. Each month got closer and closer to our goal, and it was exciting. I’d go as far as saying that the process was mostly fun (and sometimes I miss it – as weird as that sounds). It was almost like a game to see how much money we could put toward the mortgage each month.

Had you paid off other types of debt previously? If so, what type and how much?

We did actually pay off a debt previously, a five acre tract of land (which we planned to either build on or sell at a profit). We bought it for 52K and paid it off the exact same way we did the house, and listed it for sale before we started house hunting. It had increased in value quite a bit and we hoped to sell it and pay for about half our house in cash.

Unfortunately right when we decided to list it the market started to decline and the housing bubble burst, so we chased the market down and sold it for 51K just a few months before we paid off our house. We didn’t loose much money on it in the end, but the profit we had hoped for never happened.

We did end up taking 40K of the cash we received for the land and put it toward the mortgage, which is a big reason why we paid it off so quickly.

A lot of people don’t even consider that it’s possible to pay off their house ahead of schedule. What would you say to those who would love to do so but don’t see how they could right now?

It IS possible, and worth it. You may not be able to pay it off as quickly as you’d like, but the most important thing is just to get started ASAP.

Each month you put extra money toward the principal of your house, the amount of interest you owe decreases. Have you ever sat down and figured out how much money your loan is going to cost you? With most homes you can double what you paid for it, and that will be how much it cost you after 30 years. (Jackie’s note: You can easily figure this out in my Pay Off Debt app.)

If you think it’s hard finding extra money in your budget to pay down your mortgage, just think about paying double for your house. If that’s not motivating then I don’t know what is.

You’ve been mortgage-free for a couple of years now, so with that perspective, what are the best things about being debt free?

I’m sure you’ve heard the saying “the borrower is slave to the lender” (from Proverbs). Well, it’s right on the money. Debt takes away your options and your freedom. Being debt free is amazing, it opens up possibilities to do things you could never do when your saddled with debt.

Last year my husband decided to leave his comfy (but boring) office job and pursue a career he had always been interested in. He signed up for an eight month police academy…self sponsored. He never could have done that if we had debt and would have ended up staying in a job he wasn’t excited about.

So pay off your debt. It won’t be easy but I guarantee it will be one of the best things you’ve ever done for yourself and your family. 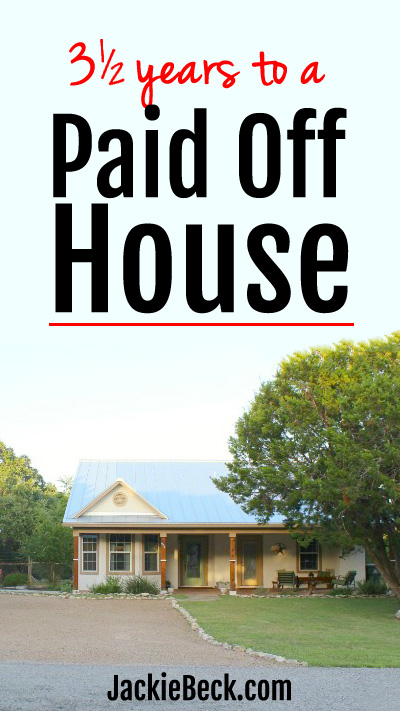 My award-winning app, Pay Off Debt by Jackie Beck, was featured in Oprah Magazine and has helped over 54,000 people.

Learn more about how to get out of debt here.